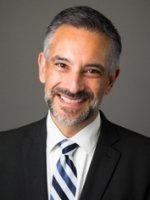 Joe Parisi
University of Missouri-Kansas City
Joseph Parisi is a professor at the UMKC Conservatory of Music and Dance where he conducts the Conservatory Wind Ensemble and serves as a music education and conducting faculty member. He is serving UMKC as Director of the Interdisciplinary PhD Program. Recognized as one of the most well-rounded faculty members at UMKC, Parisi has amassed an impressive career as a conductor, performing artist, pedagogue, and scholar.

He has made professional appearances both nationally and abroad conducting music festivals, adjudicating ensembles, and presenting clinics, research, lectures and workshops throughout the United States, Canada, Europe, United Kingdom, and China.

Parisi collaborates with many outstanding artists and composers, commission new works, and perform throughout the world. Recognized as one of America’s outstanding brass conductors, Parisi is the principal conductor of Summit Brass at the Rafael Méndez Brass Institute and Fountain City Brass Band. Both groups have a rich and distinguished history of outstanding brass playing, and under Parisi’s leadership, Fountain City Brass Band leads the United States as one of the world’s top brass bands. Parisi has been recognized numerous times with the Brass Band Conductor of the Year Award, and received the winning conductor award at the Scottish Open Championship. Fountain City returned to the U.K. in 2017 to perform at the Brass in Concert Championship in Gateshead and the Scottish Open Brass Band Championship in Perth winning numerous awards and becoming the highest ranked American Band in history (12th in the world). Fountain City Brass Band’s newest recording, Celtic Impressions, has received wide-spread praise for its ensemble precision, excitement, and musicality.

Parisi completed a bachelor’s degree in music education at the State University of New York at Potsdam (Crane School of Music); a master’s degree in trumpet performance and a PhD in instrumental conducting/music education, both from Florida State University. While at the UMKC Conservatory, Parisi has won numerous awards including the Kauffman Outstanding Service Award, the Kauffman Excellence in Teaching Award, and the Kauffman Award for Outstanding Research and Creative Activity.